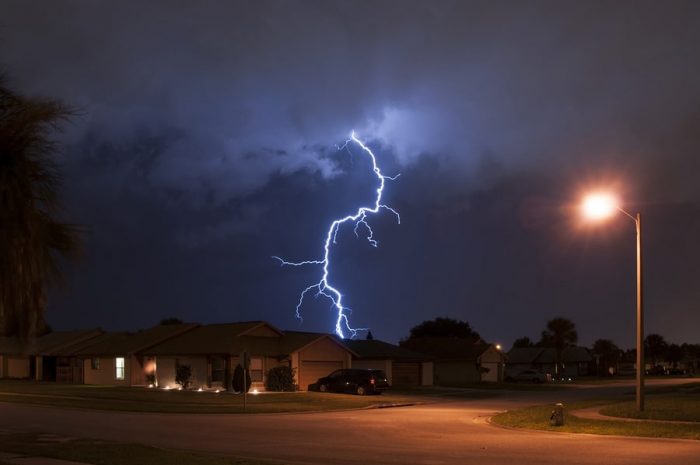 Lightning might be beautiful from a distance, but a lightning strike can be downright devastating to your home, especially the roof! The forces of nature are capable of inflicting major damages, specifically where powerful surges of electricity are concerned. It wreaks havoc with the structural and aesthetic aspects, too, ripping into beams, pipework, and appliances below.

If your house has been struck by lightning or requires any storm damage repair, don’t hesitate to call Farmington’s top rated roofers Elite Remodeling Services, (952) 646-2480. We service the entire Metro Area!

To better understand the damage caused during a lightning strike, it’s helpful to understand lightning itself. Why might lightning target your home? In simple terms, lightning is a sudden (and uncontrolled) discharge of electricity from the clouds to the ground.

When lightning strikes, it seeks out the most direct or shortest path it can follow. If your house is sitting on an area that emits an opposite charge to the clouds, lightning won’t go around it, but rather, right through it!

As lightning strikes the house, it seeks out materials which conduct electricity, allowing the surge to travel the same path. These include metal gutters and downspouts, electrical wiring, and plumbing pipes. Lightning is also capable of jumping from one conductive material to another.

No matter its path, lightning is damaging to all surfaces of a house, but especially to the roof.

The excessive heat of lightning easily damages a home’s roof, its interior surfaces, and its structural material. Lightning is so hot it can start a fire along a home’s roof shingles, trusses, joists, attic insulation, or interior walls, sparked from the heat alone.

The shockwave created by the impact of a lightning strike might also cause damages. As this wave travels over the roof it cracks and dislodges shingles, roof flashing, and chimney bricks. Falling bricks and other materials extend further damage to a home’s roof, gutters, downspouts, vents, pipes, and other components.

Despite this devastation, a home’s roof might not absorb the entire impact of the lightning strike. As lightning travels through your home’s building materials, power surges often spark electrical wiring, too, igniting fires along or behind the walls. Your home’s electronics might suffer a power surge, spark or smolder; many electrical appliances hit by a lightning strike are then damaged beyond repair.

While damage from a lightning strike might seem catastrophic, some lightning strikes go unnoticed by a homeowner! If you’re not at home when your house is struck or if the roof damage is obscured by a chimney or dormers, you might not even realize your home has been hit by lightning.

No matter the damage, however, it’s vital that roof repairs are made quickly. Prompt repairs prevent interior water leaks from cracks and gaps in the roof. Without it, the roof itself might collapse and a damaged chimney could start to lean, crack, and chip.

To avoid this potential damage, arrange for an inspection by a licensed roofing contractor once or even twice a year, especially after a strong storm in your area. At the very least, it’s helpful to scale a ladder and check the roof for signs of damage after storms.

If you decide to assess your home’s roof on your own, walking on it is strongly discouraged. A sloped roof is dangerous, even in good condition, while a damaged roof might just collapse from under you. Rather than walking on the roof, visually note any areas of buckling, missing or broken shingles, discolored spots, or parts of the roof that are obviously singed (like burns or blackness). You can often see these damages from the safety of a sturdy ladder!

Cracked, broken, missing, curled, or split shingles, for example, need replacing no matter the cause of damage. A reliable roofing contractor should be called for a more thorough inspection in the case your home has suffered a lightning strike.

A roofing contractor can also inspect the roof interior, along the home’s attic or crawl space, for additional damages. A professional will quickly note signs of a lightning strike or other needed repairs.

To ensure your home’s roof remains in top-notch condition, rely on the Elite Remodeling Services. Call us today on (952) 646-2480.